Throw the social media away for a while……

It’s tough to really switch-off from the “now” in an ever busier and connected world. There’s so little time to really think, to contemplate, to move away from the conveyor of constancy we live on. The never-ending chatter in cities, the buzzing of a phone from social media, the grind of traffic-jams and the 24hr society.

Bursting this bubble and reconnecting with the natural world around us is sometimes hard, but it is possible. Caleban states in the Tempest;

“Be not afeard; the isle is full of noises”

The British Isles are indeed full of noises. Full of sounds and sights drawn and defined by nature and man, and of a history which is too often hidden. Connecting with these noises needs somewhere special – let me take you there now…..

The Far North West of Scotland on the North Coast 500 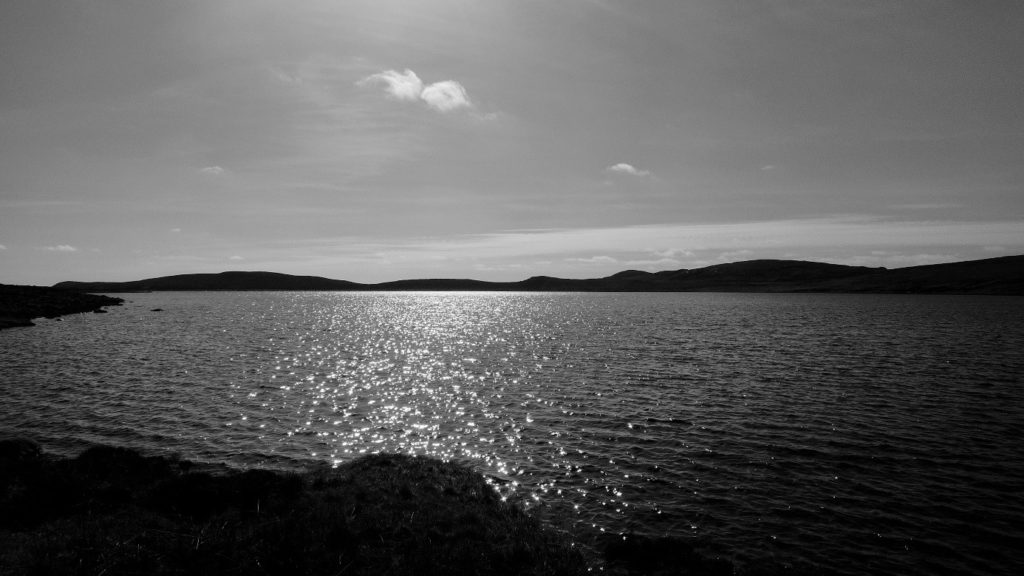 This is awe-inspiring country. Awe-inspiring due to the hardness of the landscape, the remoteness and scale, but also due to how it makes you feel inside. Around here, nature and the landscape are king, and we as humans know our place. You sense this the further North you drive. The tended fields become fewer and fewer, the passing vehicles only occasional, and the landscape more brooding. Once you arrive in the hamlet of Blairmore and step out of your car, the air hits you inside. It’s so cool, fresh, so nourishing, like drinking iced-water on a hot day and you want to gulp ever more down.

Blairmore is where we start, for this is where the road stops. We’re going to Sandwood Bay, and from here on in we’re on foot.

The Track to the Beach

Although we’re off the beaten track, this track is well-trodden. It’s easy to follow, but within minutes the stone walls hemming in scattered livestock have retreated and we’re in open country. This is cloud-chasing country, where the land is so barren you can watch the shadows of clouds racing across. It might be barren but it’s also beautiful, with the heather dappled in colour as far as the eye can see. 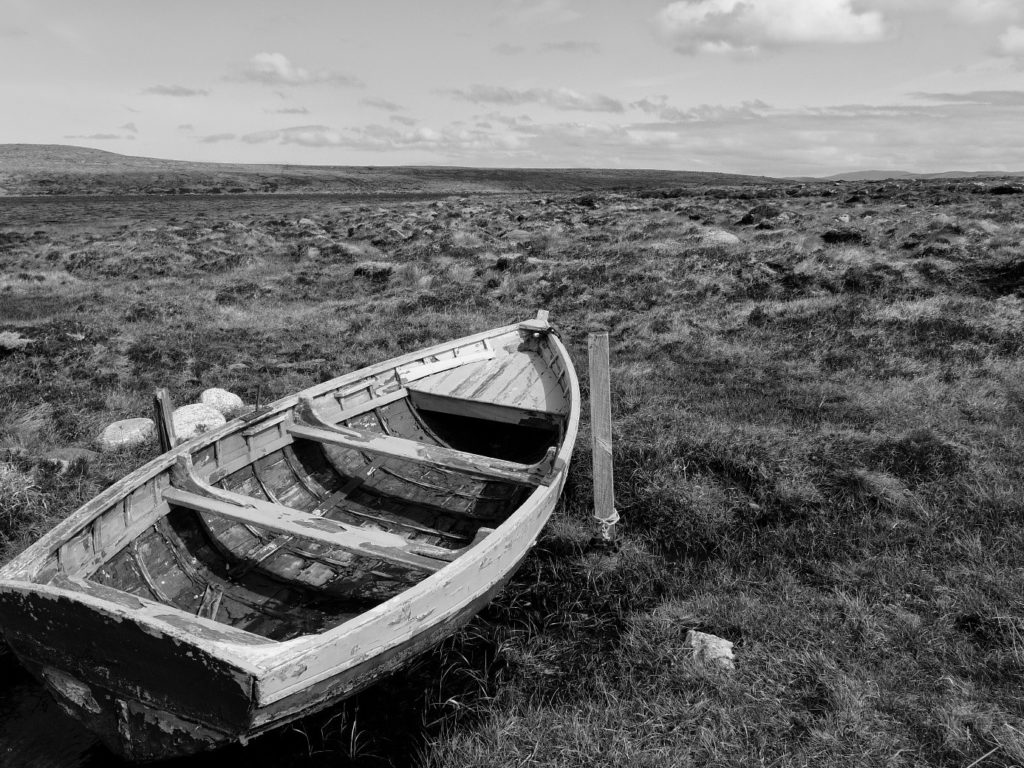 There’s a Loch on our left, with clear water stained a light whisky brown from the peaty soils. Today, the sun sparkles on the surface as small wind blown ripples shiver across the Loch. 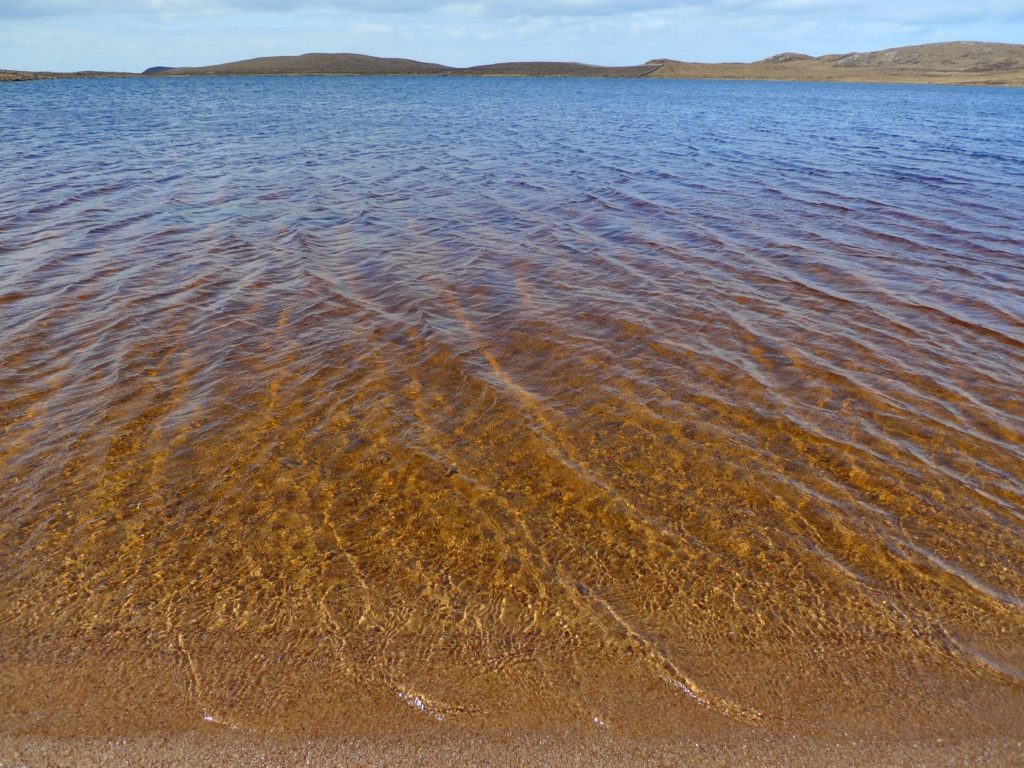 Echoes of the past

An hour after setting off we’re now heading slightly downhill, the freshwater Sandwood Loch ahead of us. Once there were people here, but no more. Only the tumbled stone walls of a long abandoned cottage and sheep enclosure hints at a life spent on the land. There’s only voices of the past audible above the building roar of the ocean just out of sight. 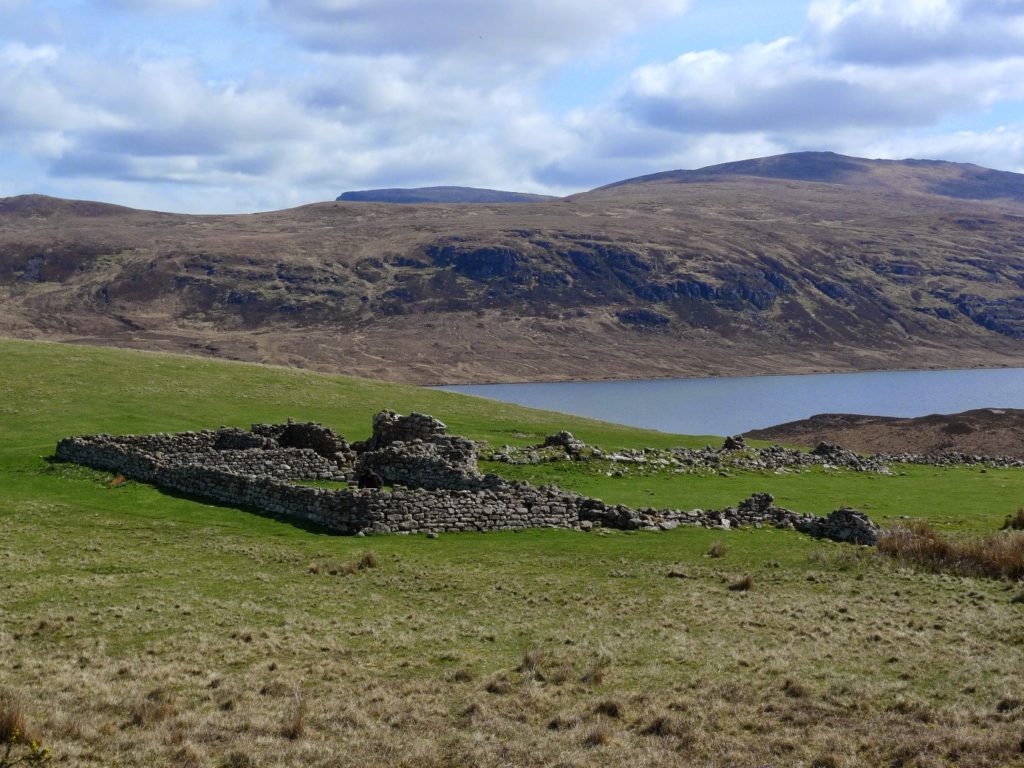 The way through the sand

Turning to the west, we pick our way through wind-blown dunes of sand, the marram grass defiantly colonising wherever it can. It’s slow going now, with every footstep sinking into the sand and the path ahead blocked by mountainous drifts. Then cresting a ridge suddenly we’re there.

The Beach beyond the mountains 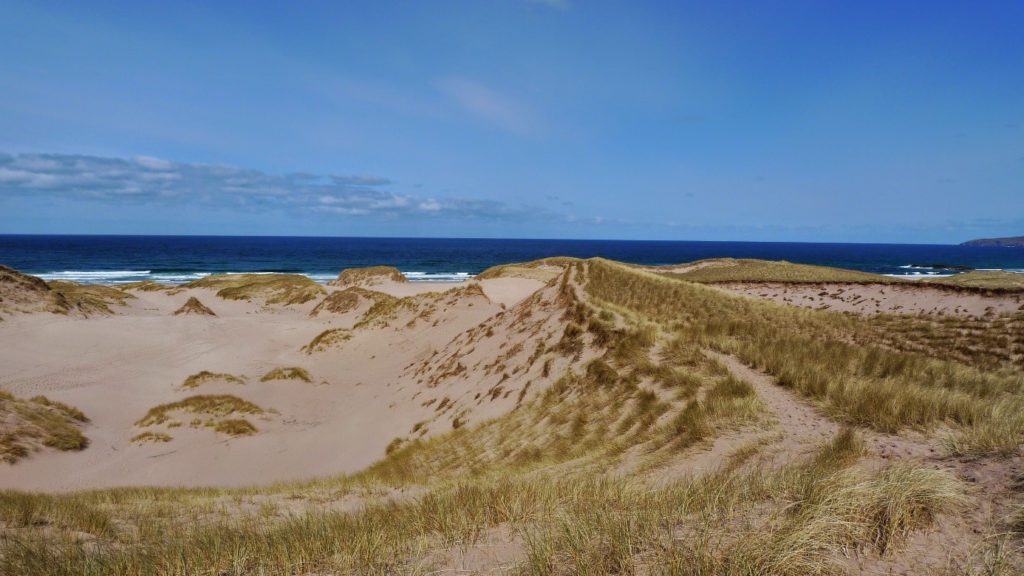 The roar gets to you first, the noise of a thousand waves tumbling against sand and rock, the end of their Atlantic journey. Then the colours, the foaming whites of breaking waves, then the deep blue of the sea beyond. And in front of us the shimmering golden sands of Sandwood backed by green and purple hills and stark black granite cliffs. Above us wheel the seabirds, angry at our presence and in disturbing their play.

Behave as a Guest

This is wild untamed landscape. We have to stand for some time just to drink it in. We have no other distractions because this is sensory overload, nature full-throttle. But here we’re just guests. Cape Wrath just to our North is evocatively named, although in Norse it means “turning point”. Many ships never made the turn or foundered soon after, and until the 19th century Sandwood was a graveyard for many. The thrashing sea and stark coastline stands in testament to those who paid the ultimate price.

Up onto the cliffs 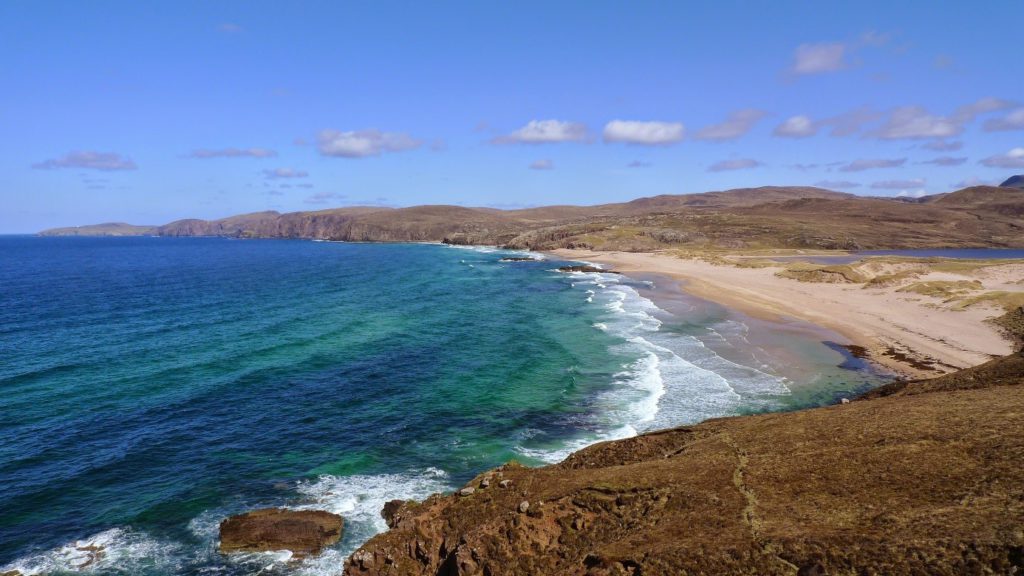 Your phone here is useless, the navigation has no clue. But if you’re clever you have an OS map and can pick your way up the path to the south of the bay. Dodging cascading waterfalls down the cliffside and yawning chasms that appear without warning, we come to the sea-stack. This stands since who knows when, a vertical palace for the thousands of seabirds who call it home 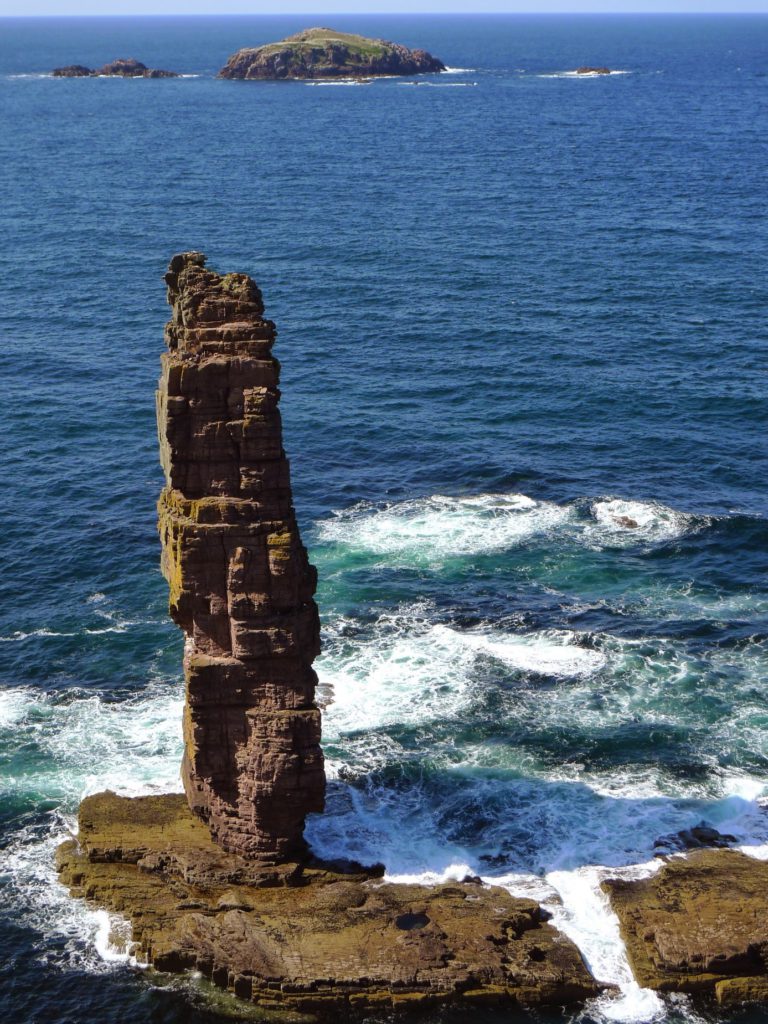 But darkness is falling on Sandwood Bay

It’s time for us to leave, and we need well over an hour to get back to our starting point. This land is not empty, but it’s not ours, and our time as a guest is coming to an end. As the bay retreats behind us so does the roar of the sea, and what had seemed like a hard landscape before now seems much softer. As we near Blairmore and the first lights are visible the dial gets wound down even further. Today we experienced nature full-throttle and cleansed our souls. We’ll sleep well tonight. 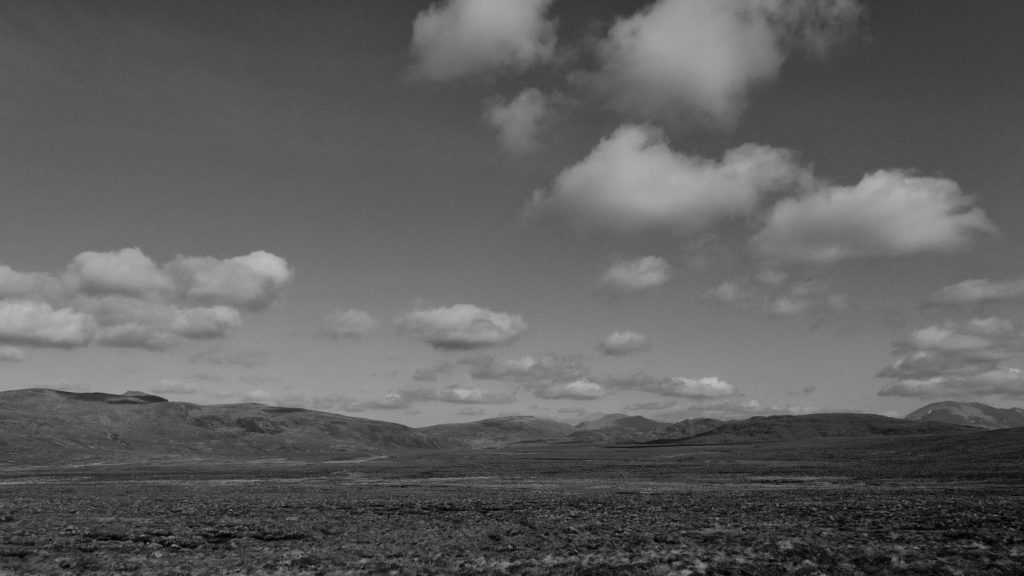 As you can probably tell, Sandwood Bay is a very special place and I felt a great privilege in being able to visit. This is now a regular stop off on the North Coast 500 so is becoming justifiably popular. Please help keep it special if you visit – leave no footprint and let the landscape work its magic…..

5 Things the British do better than Germans