There are dozens of viewpoints, or “Miradouro’s” in Lisbon offering wonderful views. There’s no other like the Miradouro Panoramico de Monsanto though. Not only does this have the best view in Lisbon, it’s also one of the most fascinating and exploration worthy buildings. This is a side-trip that’ll show you a different side to Lisbon!

The building itself is really quite new – it was only built in 1967. It’s crammed an awful lot into those fifty years though. From a high-society meeting place in the 1960’s and 70’s it sadly became a derelict and dangerous eyesore, and finally a cleaned-up yet still gritty tourist attraction today. 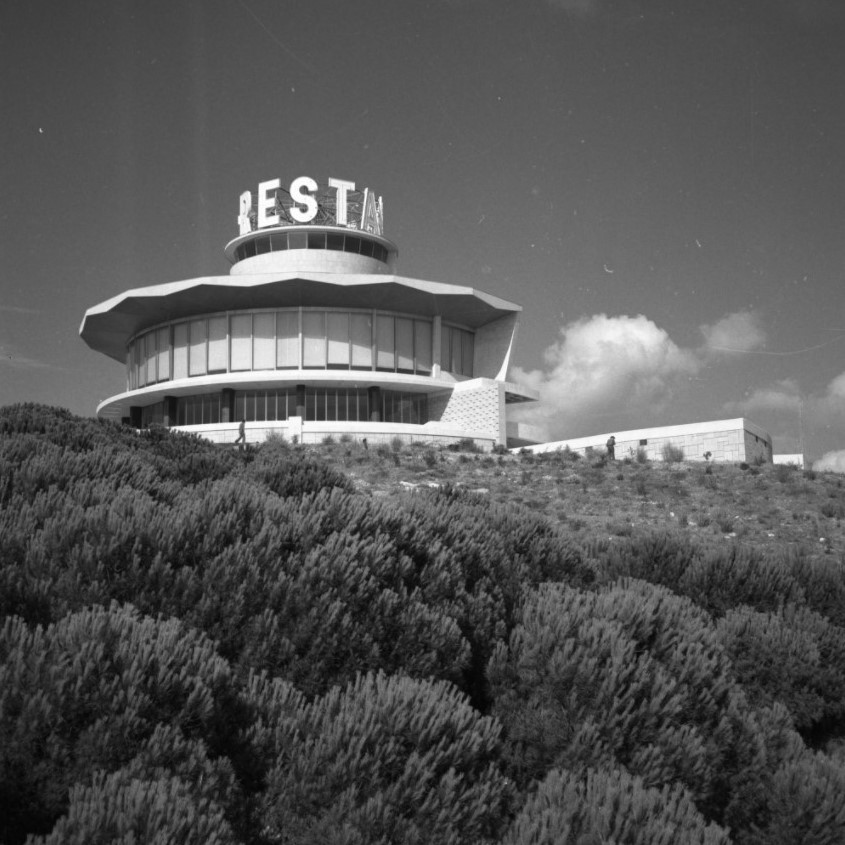 Panoramico de Monsanto in the 1960’s

The modernist masterpiece opened in 1967 on one of the highest points in the Monsanto Park above Lisbon. Resembling a UFO, the building housed a restaurant, bar and coffee lounge, as well as the rooftop belvedere. The big selling point was the view – at 205m above Lisbon the whole city lies before you. The restaurant with a huge circular glass wall made the most of what was the best view in Lisbon, and wealthy residents, celebrities and politicians flocked there.

The heyday of the restaurant didn’t last long. Economic difficulties and changing trends allied to the remote location led to a steady decline in customers.  By the year 2000 the last users moved out. The exposed location and lack of security led to a rapid decline, with the building falling into disrepair due to vandalism and weathering. But it still had the view, and so was a regular meeting point for youngsters who’d jump the fence and climb to the top. By 2015 the building was a wreck, the interiors trashed and covered in graffiti. Check out the sad state in the video below:

Finally in 2016 a solution was proposed to bring life back into the building. Rather than the huge expense and uncertain success of a full renovation, a “partial” renovation was proposed. This would secure the building, remove unsafe materials and bring it back into use as a viewpoint. The work was completed in the summer of 2017 and it opened in September, thus returning the best view in Lisbon to the people 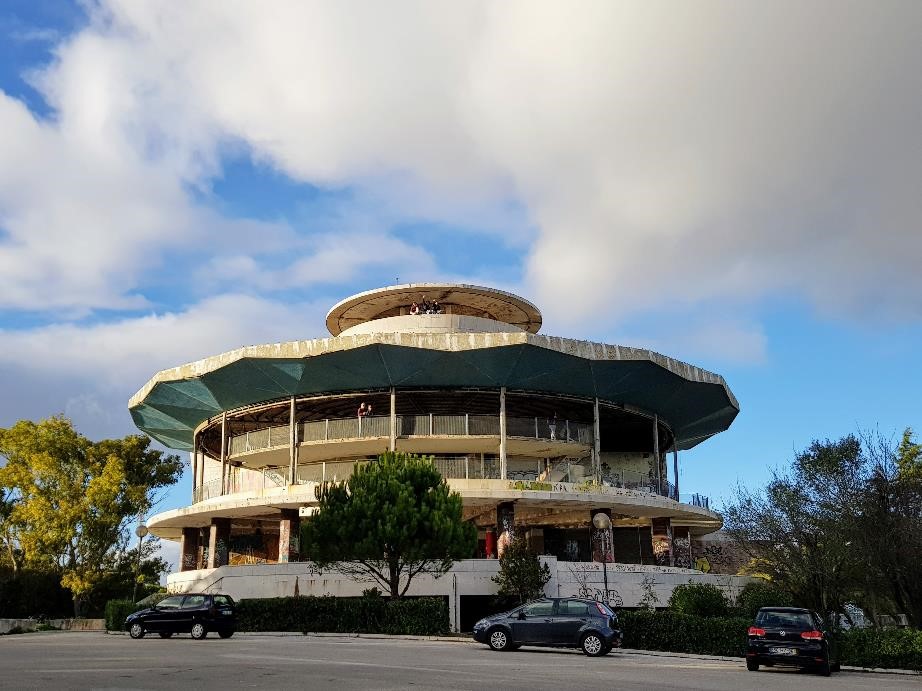 I really don’t think I’ve visited anywhere quite like this. There’s a lingering feeling of menace in the building, with the dark stairwells, dripping concrete and graffiti covered walls. But then you see an official signpost pointing you to the next floor, or newly installed safety railings and smoothed concrete. And around the corner you find instagram groups or a fashion photoshoot, but also up on the roof a group of kids with a guitar eyeing you with suspicion. This is a building still in flux. 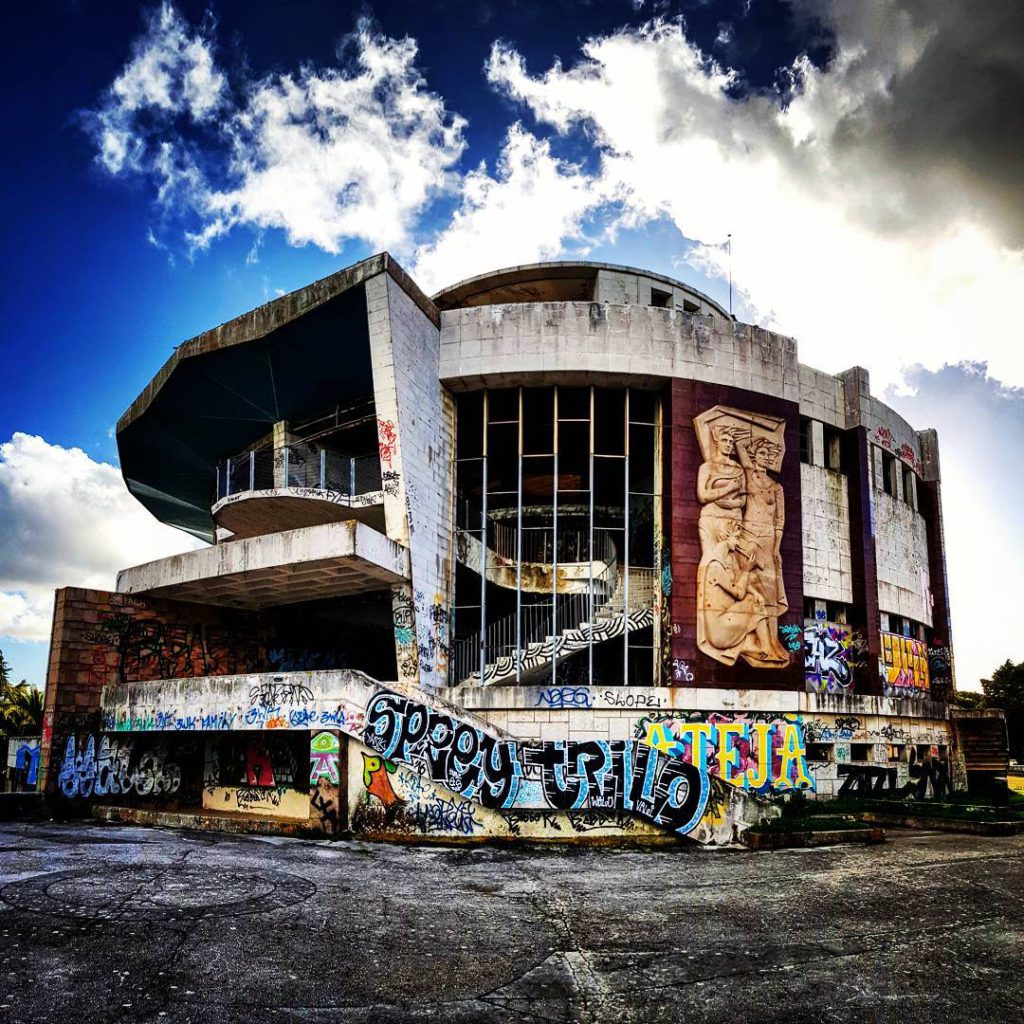 Amazing building. There’s enough left to imagine what it was like in the 1960’s as a bold statement building.

The Panoramico de Monsanto is about as raw as attractions come. In fact it doesn’t even set out to be one. There’s no entry price, no guidebook, and no staff except a lone security guard on the gate. It almost feels like the city worked out people were going there anyway, so probably better to make it safe and useable than have all the problems of a derelict building. You won’t find this in any guidebook, and right now it’s mostly locals who know about it. 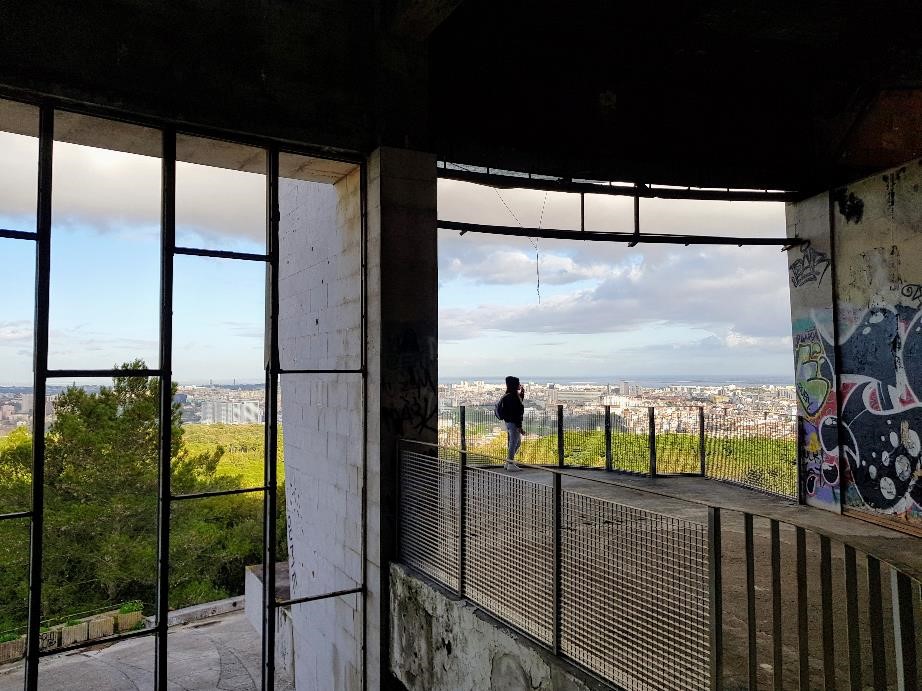 It’s only when you stand outside you get a sense of the scale – it’s a 7000sqm building, and it has five floors including underground parking. Take a walk round the outside first, because you don’t want to miss the large panel artwork at the rear 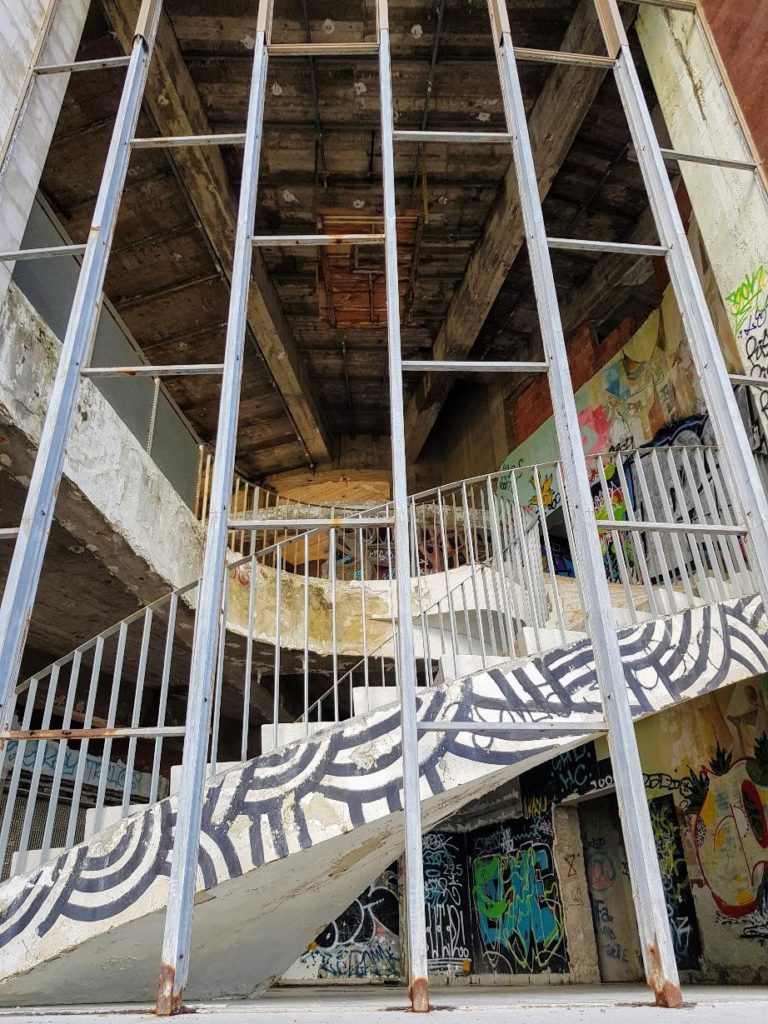 The first floor above ground is the original bar area – here you’ll find the amazing ceramic panel artwork by Manuela Madureira. At the rear, the sweeping circular staircase takes you past the remains of a mural by Luis Dourdil. Sadly little remains due to vandalism and weathering. 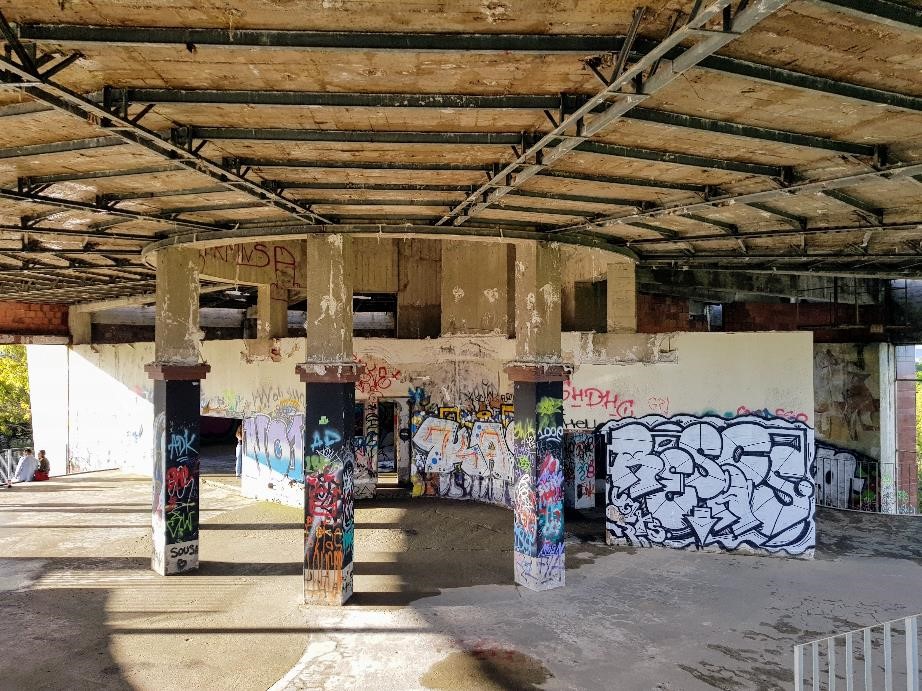 The next floor is the restaurant space – a huge room opening out onto the best view in Lisbon. Going further up you eventually reach after a couple of small rooms the Belvedere itself. 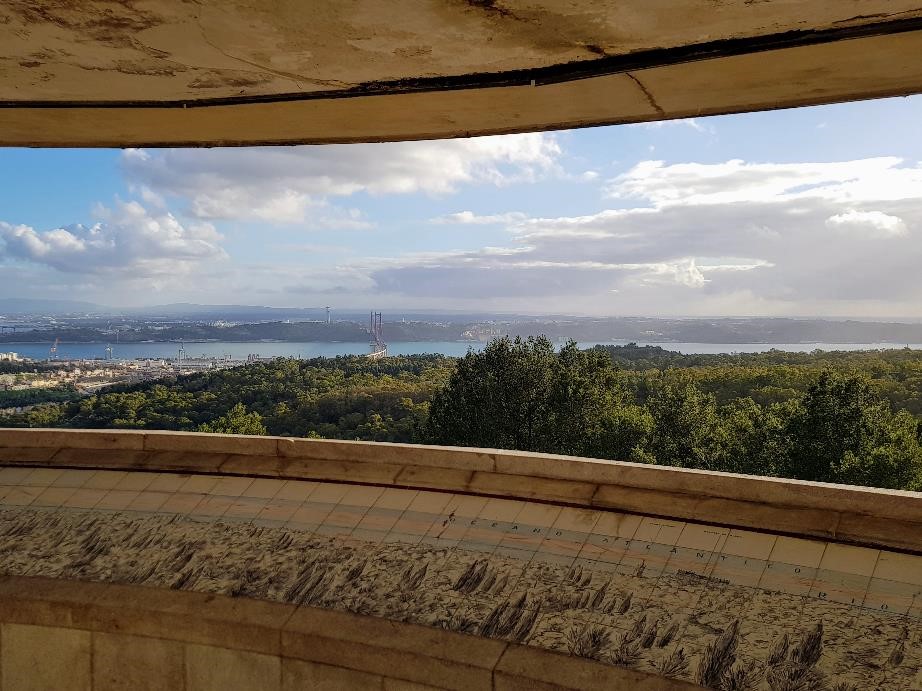 The beautiful tilework showing all the sights in front of you

This gives an almost 360 degree view of Lisbon, and the whole room is decorated with amazing tile panels displaying the sights in front of you. Be here for the sunset if you can – it’s worth it.

A tile panel depicting Lisbon before the 1755 earthquake

At the rear of the Belvedere is a fabulous tile mural of the city before the earthquake. The juxtapositioning of traditional Portuguese crafts such as tilework in such a modernist building makes this a fascinating place.

The building has been made safe and all dangerous materials removed, and there are railing where needed. Regardless, it is essentially a derelict structure so just take care. In addition, although the graffiti is now a part of the attraction, please remember how much of the original interior artwork and structure has been lost due to vandalism. Leave it as you found it…. 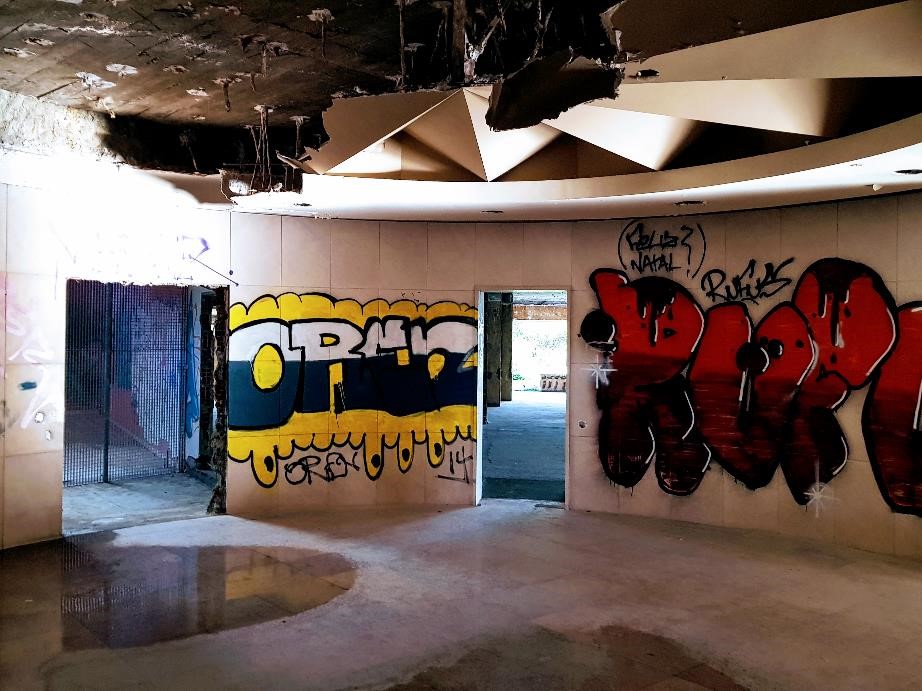 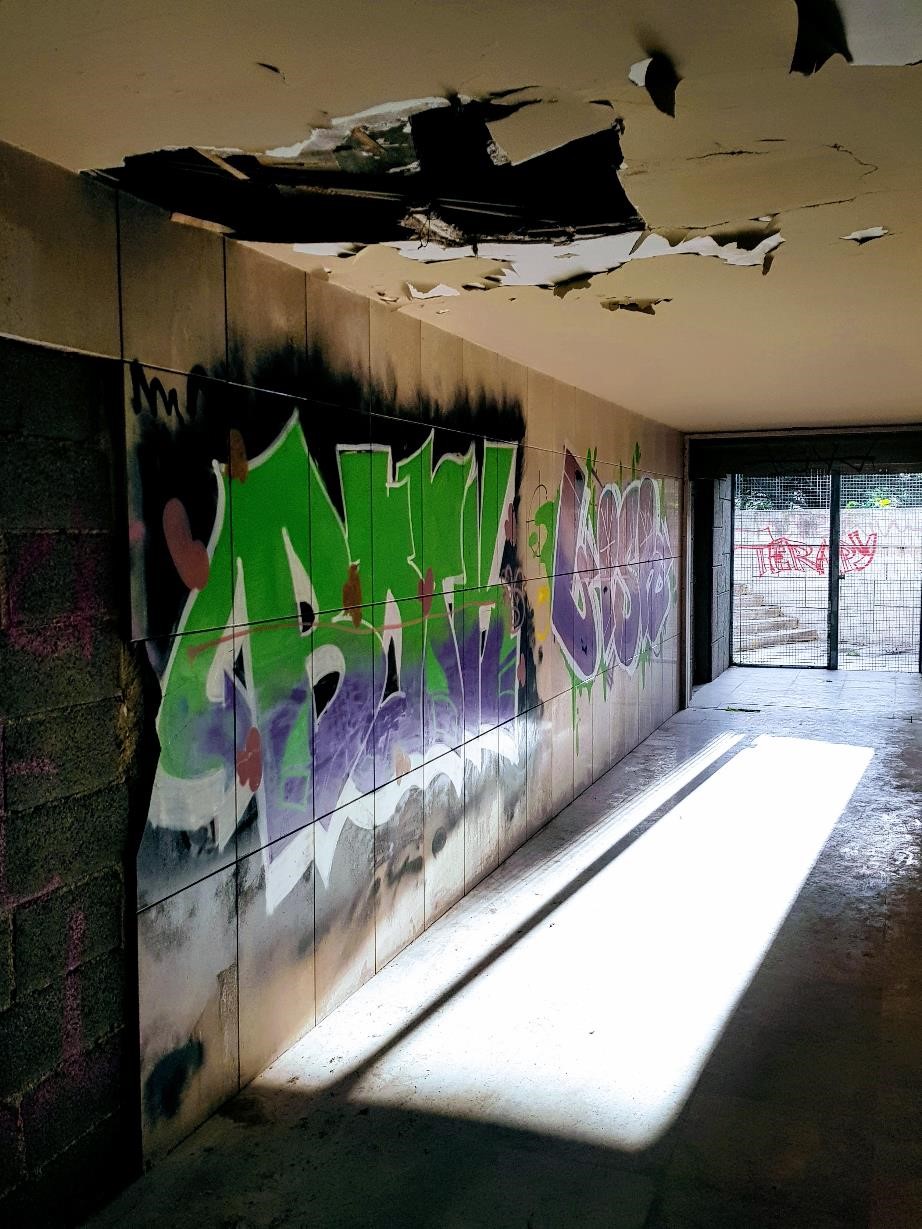 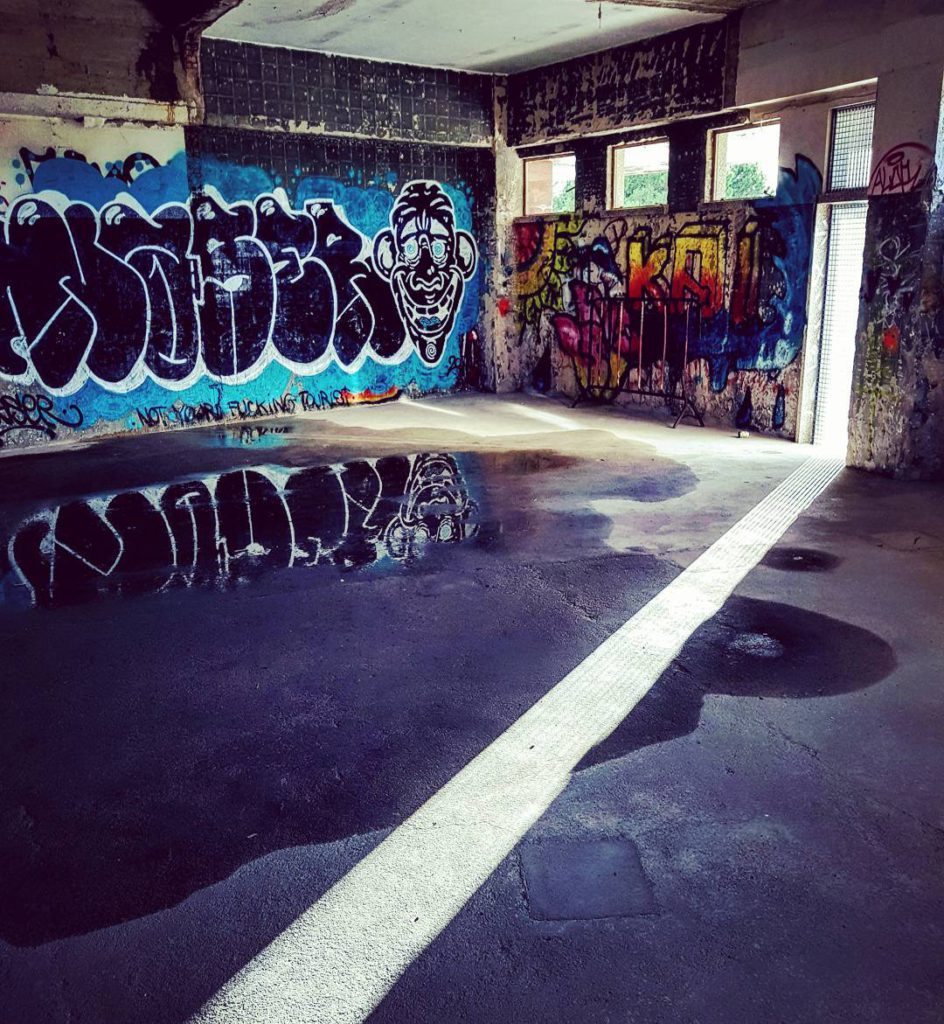 Abandoned rooms around every corner

Getting to Panoramico de Monsanto

It’s easy to find on Google Maps, but not easy to reach without a car. You can get the 711 bus from central Lisbon to a stop at the end of the Estrada da Bela Vista, some 700m away – from here you’re on foot. The site is open in the hours of daylight only from 9AM till sunset, and there is now round the clock security. It might seem like an unnerving place, but it’s now quite safe to visit. You won’t find it on any tourist websites, and it probably isn’t on any of the organised tour routes. Go there now for the best view in Lisbon before everyone else finds out about it!