Cities in the daytime are like a living, pulsing mass of energy. The flow of passers-by, the thunder of footsteps on the pavements. The rumble of traffic and the clanging of trams. The hum of music played by buskers and the calls of market traders. Cities during the day never rest, they’re always on the move, always morphing into new forms and functions. Nuremberg is no different. But come darkness, the midnight hours and the retreat of footsteps, Nuremberg becomes something else. To experience this is to experience the sleeping city – Nuremberg at night 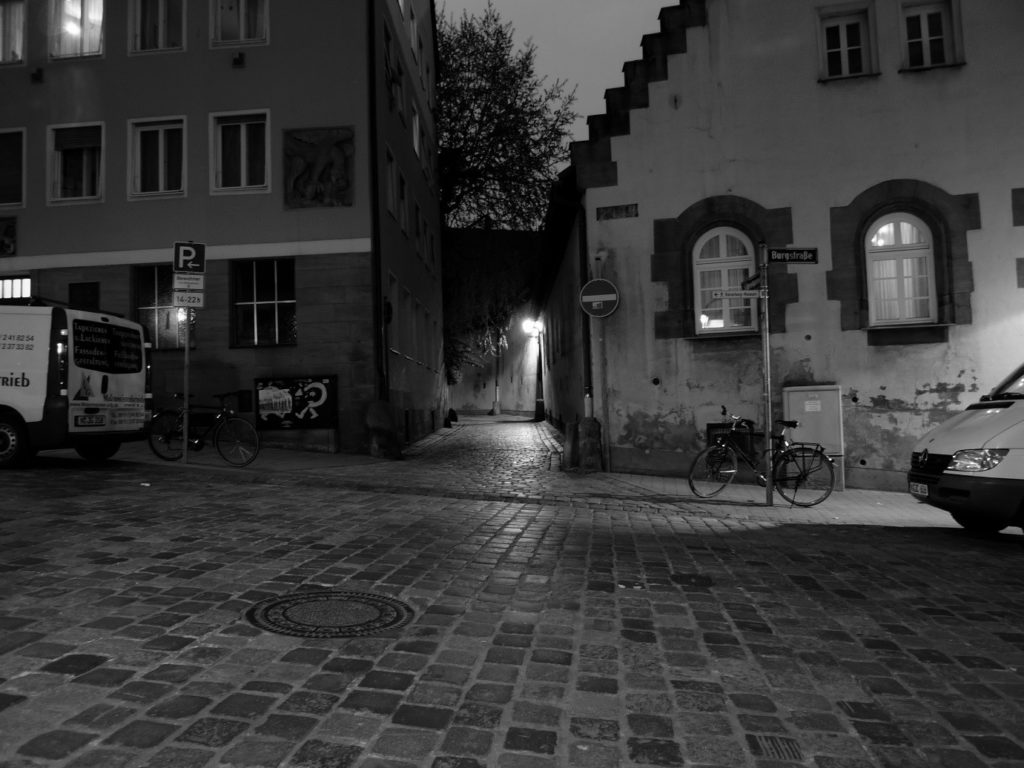 The city can’t sleep every night. At the end of the working week and on a Saturday night the harrassment by visitors goes on. The roving groups of drinkers, party goers and dinner guests never ends. The smash of breaking glass as a beer bottle goes to ground, or the scurrying lines of taxis wating to carry the drinkers home. Come the break of dawn across the rooftops, the air hums to the thrashing of street-sweepers and their spinning brushes.

But on Sunday night it’s different

Sunday night lets the city finally breathe, lets the pavements stand at ease. On Sunday night it’s the sleeping city you’ll meet. On a rain soaked October evening it’s even quieter than normal, the bars emptier, the restaurants standing empty. Bikes stand waiting and chained against lamp posts, their owners sitting warm inside or already in bed. Some stand forlorn and forgotten, their wheels rusting, their tyres flat or rotten. 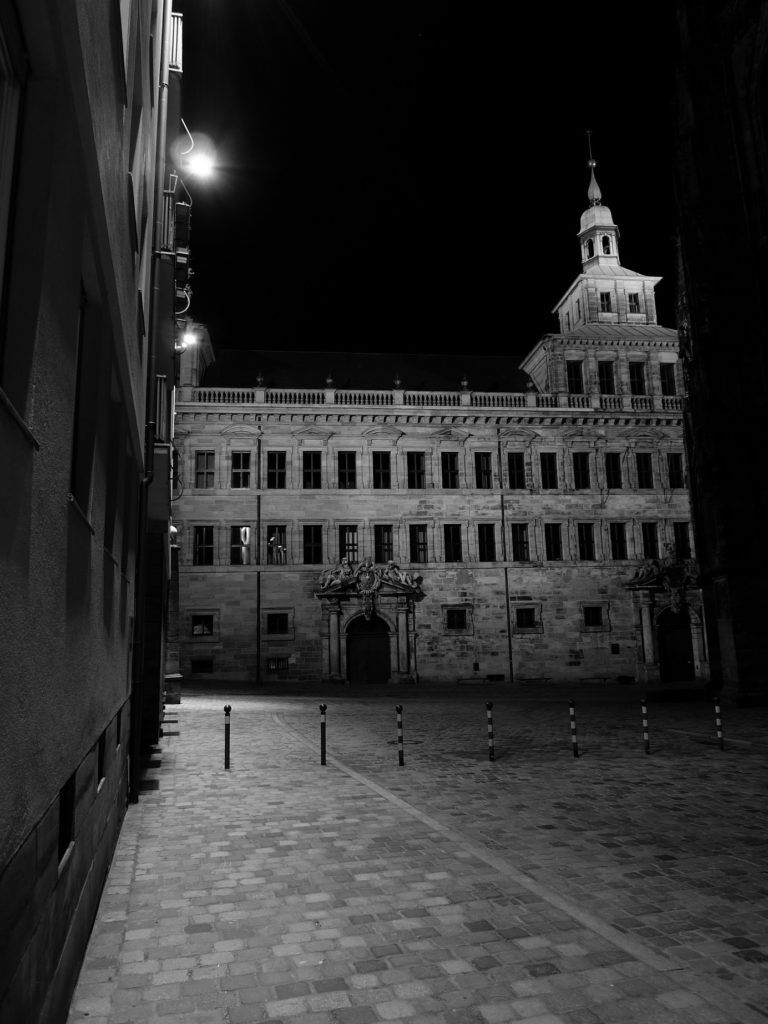 Above the streets the darkened windows glare down, the workers long gone, the lights long switched off. But the floodlights remain on, those same darkened windows bathed in their light. The buildings are like skeletons, hollow inside, just a frame holding an empty space waiting on the morning to come. Places that should be filled with people seem strange when emptied of them.

In ancient towns like Nuremberg the feeling is even more intense, the weight of history bearing down upon the streets. Buildings that have stood for a thousand years lend their austere gaze to the scene. The mass of a darkened stone cathedral, the defensive might of the city walls. These buildings have lived through war, peace, and a thousand years of trampling feet. Just one-night a week to they get to rest, the stone floors and walls sitting silently as if asleep. 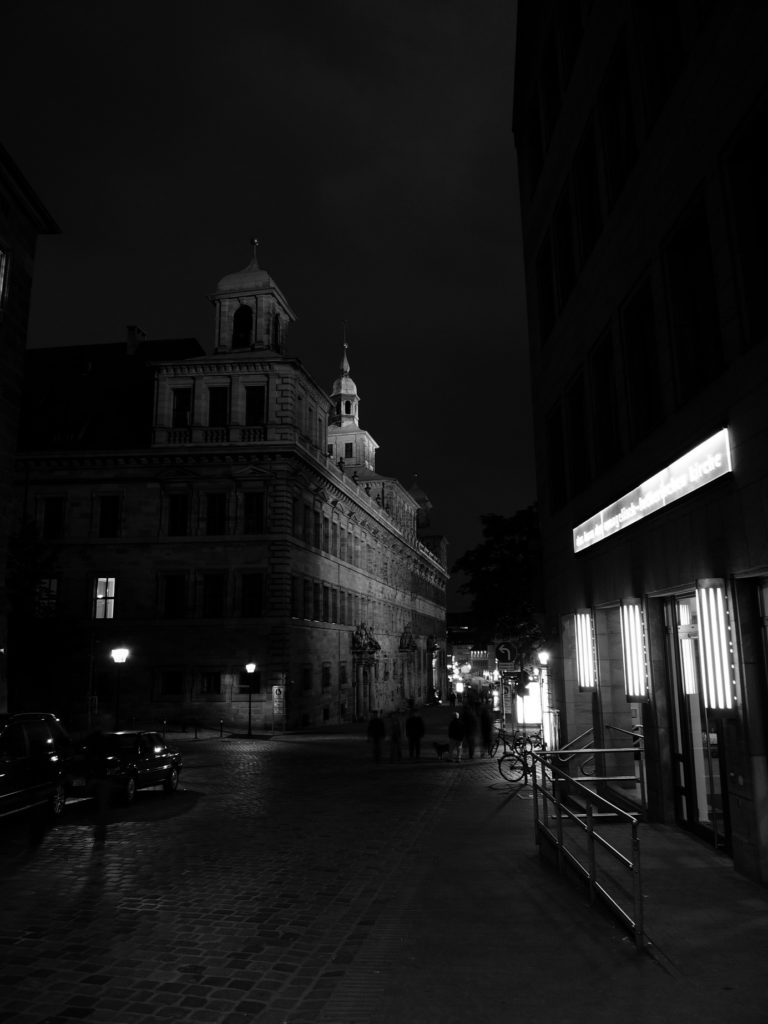 Sitting high above all else, like an emperor surveying their troops is the Kaiserburg. The floodlit roof of the imperial stables leading to the beacon like Sinwellturm, pointing up to the heavens and watching all around it. The main bulk of the Kaiserburg, growing upwards as if it were part of the rock upon which it rests.

During the biting cold winter nights Nuremberg comes into its own. Shuttered against the cold, the guest-houses of the old-town emit a comforting glow through their curtain bedecked wooden windows. Their wooden floors warming the feet of those who’ve been pounding the streets of stone. With snow on the ground the old-town shimmers in the light of a thousand flood-lights, a glow rising far above it up into the sky. For one month of they year the peace of a Sunday night is disturbed by the Christkindlesmarkt, a million tourists pouring into the town. For this month the town works all week, the smell of gingerbread and sausages mixing in the ice cold and crisp air. Thousands of hands clutch steaming mugs of Glühwein and the breath of their owners forms steam-trails in the air.

The river that splits the town moves silently yet with purpose, the darkened mass of water sliding stealthily between the buildings. The quiet of the river on every other night is a contrast to the rowdy streets. But on a Sunday night the calm overflows its banks and spreads like a blanket across the town. It’s a blanket that envelops each visitor too, every pedestrian moving a little quicker as if disturbing the hours of rest.

Welcome to The Sleeping City – Nuremberg at Night 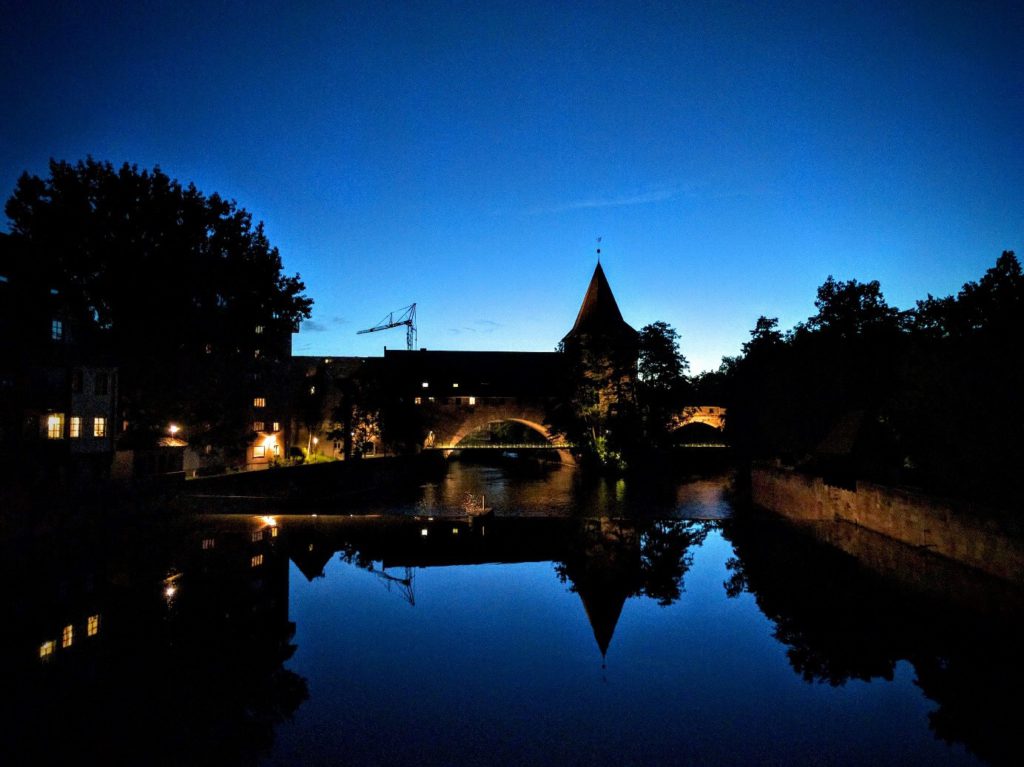 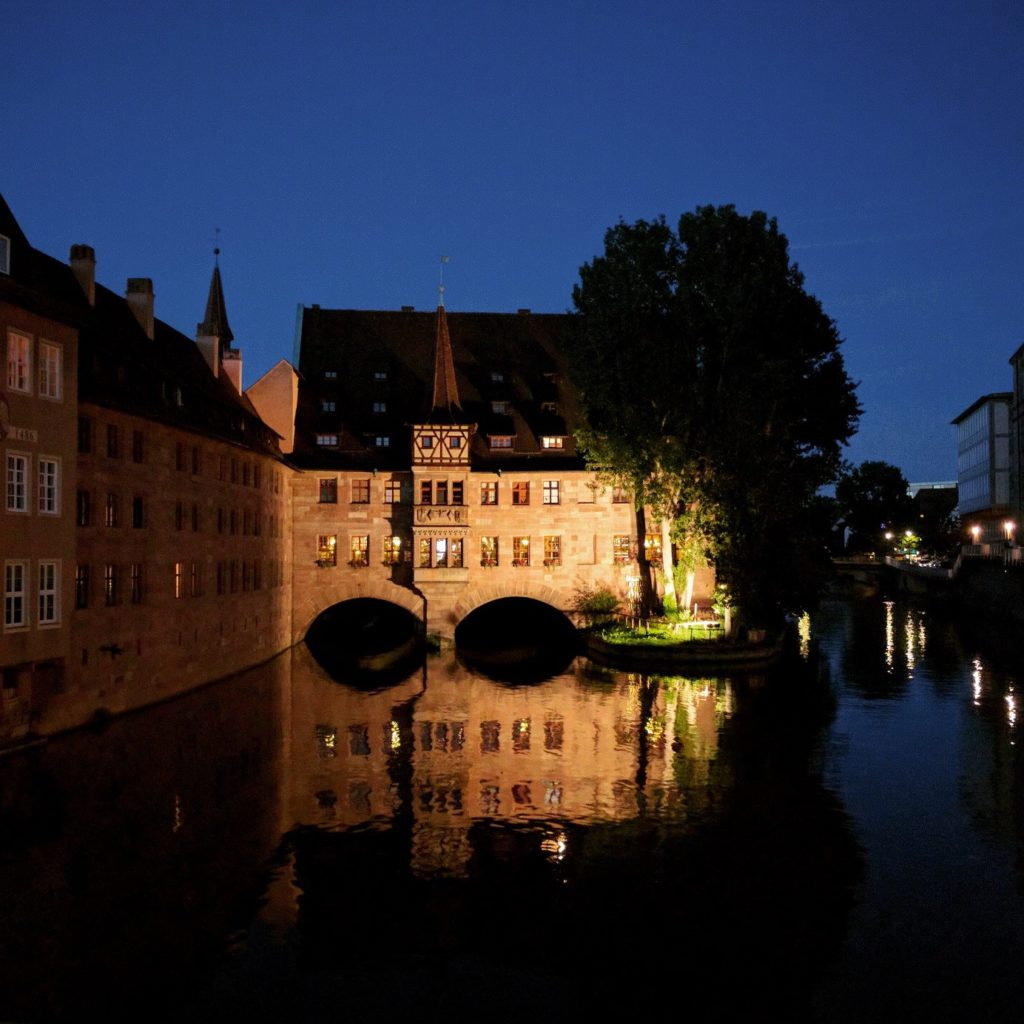 Budget Travel in Germany – The Best Value Cities and Regions