There’s little that speaks more quintessentially of England for many people than partaking in afternoon tea. For many visitors, having afternoon tea is now a staple part of a trip to the UK. As a result, the number of hotels, restaurants, cafe’s and even pubs that offer it has skyrocketed in recent years. But British tea culture is about a lot more than just afternoon tea. Let’s take a tongue-in-cheek look at the British tea obsession!

George was right – the debate over exactly how to make and consume a drink composed (for the British anyway) of exactly two ingredients (or three if you take sugar) is fierce. The debate over how to pronounce the name of certain baked goods that one traditionally eats with afternoon tea is equally fierce.

What’s certain is that most people (yes, including me) are quite set in their ways when it comes to tea, how they like it made, and what they like served with it. To understand why this is, let’s get under the skin of the British psyche and explore the cultural relationship with tea

Why is tea so associated with the British?

Twinings on the Strand in London

That’s a good question, because of course tea doesn’t even grow in the British Isles. OK, slight lie, since there’s now one tea plantation in Cornwall. To understand the relationship, we have to go back in time to the 1600’s. Samuel Pepys records in his diary in 1660 that Charles II was presented with tea as a gift from the British East India company. His wife (Catherine of Braganza) then introduced the drink within the royal court which quickly increased it’s popularity.

The rest is history – Twinings was founded in 1706 as the first tea house and merchant, and since then tea is a staple drink!

How do the British take their tea?

Now we’re getting to the real complexities. In general there are two options:

The Royal Society of Chemistry support option one, since it appears the taste of the milk will be adversely affected should it be added to hot water, rather than the other way around. I’m also a believer in the first option, but it does mean you have to be confident your tea is brewed strong enough so you don’t end up with a pallid white liquid.

If you’re just making a mug of tea – here you have little other option – the milk must be added after the tea is brewed and the teabag removed. There is a secondary “unofficial” method for those in a hurry: You simply chuck everything in the mug, throw the hot water in and then run back to your desk. This method is commonly used when ducking out of a boring conference call or similar.

How to avoid a British tea calamity

If you like your tea to be strong, the teabag absolutely must be in the mug or pot already at the time of adding the water. Since living abroad, I’ve noted a worrying trend of serving a cup or pot of hot water with a teabag on the side. This creates a big problem – the water is simply too cold by the time it gets to you to brew a proper strength tea. This might be OK for herbal teas or light continental blends, but a strong cup of British black-tea with milk – it just won’t work. 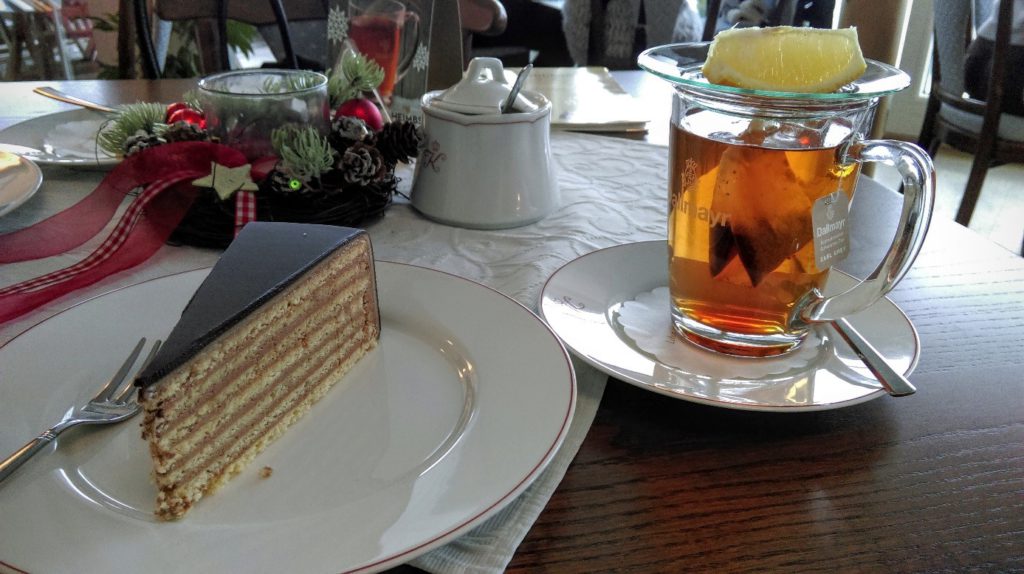 Sorry, but this just wont work for a Brit…..

When do the British drink tea

This is a pretty silly question, because of course it depends on the person. Some need a constant infusion of caffeine, and a mug of tea (or coffee) is almost permanently fixed in their hand like an IV drip. Others might have a cup on waking up and then maybe later in the day. Others like me might avoid it entirely past about 7PM in case they never get to sleep..!

But tea drinking really does have a structure to it, and the key to knowing how to serve the tea is in understanding this structure!

Breakfast or Morning Tea is normally the strongest brew possible – hence there is a specific blend available. Most people will drink this from a mug with breakfast, although in a hotel or cafe it’ll commonly be served in a small teapot

Elevenses is when you have a tea-break mid-way through the morning (obviously at 11ish). With elevenses it’s traditional to have some biscuits with your tea, and to “dip” them in the tea should you wish. Ther’s a vast range of biscuits eaten in the UK – examples being Rich Tea, Nice or Digestives. If you invite friends round for elevenses, you would offer perhaps lemon drizzle cake and use a tea service. In the office a tea break would be much more informal.

Cream Tea or “Light” Tea is always served in the afternoon, and is somewhat equivalent to elevenses, in that it revolves around the serving of tea, with most likely scones or small sandwiches. The “cream” refers to the fact that the scones should be served with the delicacy clotted cream. This could be served standing-up in an informal environment as a buffet 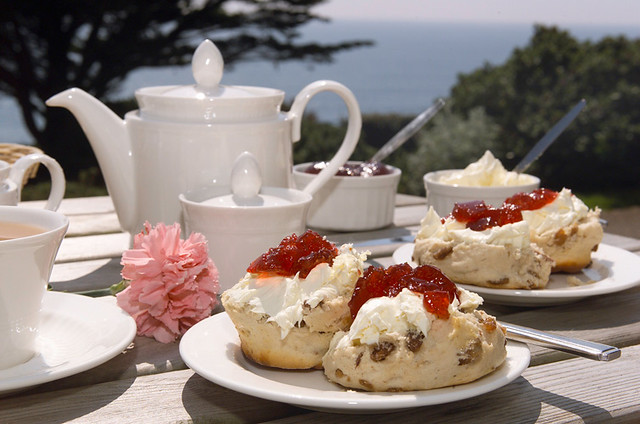 Afternoon Tea is reserved for the time between 1500 and 1700 in the afternoon, and is basically a meal in itself. This should never be served at the table, but in a lounge setting with small side plates from which to eat the food from. The best tea-service and crockery should be used for this occasion

High-Tea refers to the fact you take it “at the table”. This would be served after 1700, and is one of the reasons there is often confusion as to whether the evening meal in the UK is called tea, dinner or supper. A high-tea comprises a larger selection of cold-cuts and savoury items rather than sweet or baked goods.

How to make your own afternoon tea and impress your friends! 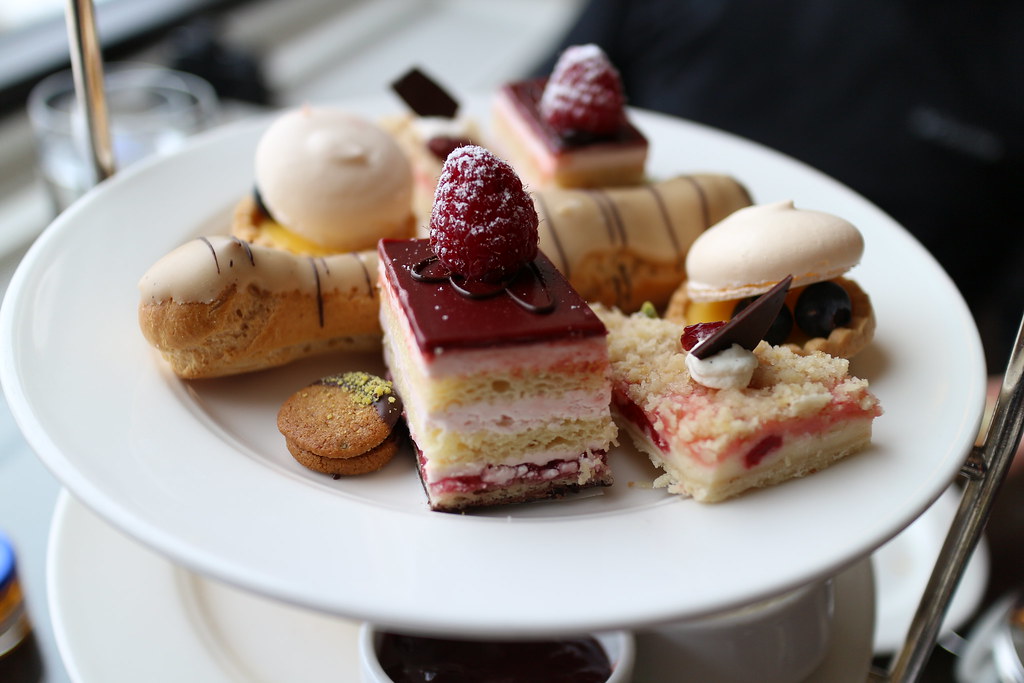 A typical cake and pastry selection

The starting position here are the “Scones”. Yet here again we come to a bone of contention between Brits: Should it be pronounced “Skoownes”, or alternatively “Skons”. Even within the same family, nobody can seem to agree – call them what you like. Scones can be bought in all major supermarkets and bakeries in the UK. If you want to make your own, I can recommend this BBC food Scones recipe – really simple!

With Scones you should always have clotted cream (which is a speciality of the British West Country), and a good strawberry jam. Preferably home-made, but if not Tiptree of Essex have a good one which can be bought worldwide. Rather like with the milk/tea question, some like to debate whether it’s cream first or jam first on the scone. Again, do it your way!

Scones fresh from the oven

For a the sweet goods, really the sky is the limit. Butterfly cakes, petit-fours, or any cakes/pastries you like could be used. For inspiration the BBC Good Food magazine has a whole page dedicated to Afternoon Tea Recipes.

After you’ve worried about the food comes the important part – ensuring you use a large enough teapot for the number of guests, and choosing which tea to use. I’m a particular fan of Yorkshire Gold tea, but really this comes down to personal taste. Just make sure you use something authentically British in terms of blend (assam/ceylon), and also that it’s strong enough. Properly brewed tea should be a dark brown colour – not light brown or orange as would be common on the continent. 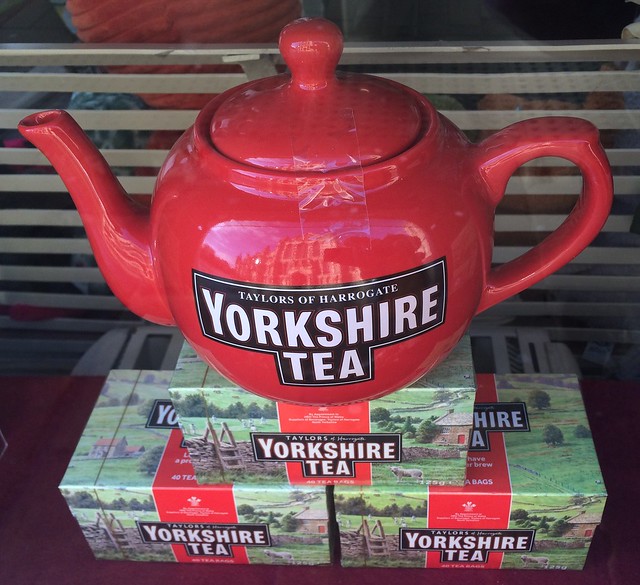 For a good cuppa, it’s critical you use good quality fresh milk (UHT or long-life will taste dreadful). In addition, the higher the fat content the better since this will impart a “creamier” taste.

Afternoon tea is a formal occasion, and so you should seek to use the best crockery and cutlery possible. For ideas the English Tea store has some good examples, but most department stores worldwide should have a selection. The teapot should under no circumstances be metal or glass – it won’t hold the heat.

How you serve the sandwiches and cakes is also important – for this you really need an “Etagere“, or at the least a cake stand to present your wares upon. The teapot, cups and saucers  should be served upon a tray, and if you want to keep the teapot warm you can use a “tea cosy”. Ensure each guest has a sparkling clean teaspoon to stir their tea once they’ve added the tea to the milk!

The entire service should be placed on a coffee table, around which the easy chairs should be arranged to allow easy access. Of course, if the weather’s good you could have your tea party outside which turns it into a Garden Party like at Buckingham Palace!

Last but not least, enjoy your Afternoon Tea!

So there we have it – a short walk through the British relationship with tea. I hope my guide inspires you to give the wonderful ritual of afternoon tea a try. If you’re not a fan of strong tea then of course there is an endless range of other teas you can drink – I only focus here on black tea for the sake of tradition.

If you’re visiting Britain then make time to sample an Afternoon tea in a traditional tea room like Betty’s, or alternatively most good hotels will offer a suitable formal option. Most cafe’s will also offer a cream tea option at the very least.

If you’ve had a great afternoon tea – feel free to comment below! Some of the pictures I took here are from the Christchurch Harbour Hotel which was a birthday treat in 2016 – I enjoyed it!

5 Things the British do better than Germans