Summer (and thoughts of sailing) came to an abrupt end across most of central and Northern Europe in 2017. Despite enjoying temperatures in the 30’s up until the end of August in Germany, on September the 1st someone flicked a switch, and the temperatures pretty much halved overnight, and rain started to fall pretty much every day.

Not the best conditions for sailing you might think – indeed you’re right, although one thing more unsettled weather tends to bring is more wind – and that of course for sailing is critical!

You might also think that sailing would be a tricky sport to practice in a city like Nuremberg – some 600km distant from the nearest stretch of coastline. Still, most sailors don’t let a trifling matter like that get in the way of their sport, and indeed Bavaria has a thriving watersports and sailing community. The lakes of Southern Bavaria at the foot of the Alps are well known – the Starnberger See, Chiemsee etc being well known tourist destinations as well as sailing locations. Northern Bavaria and Franconia cannot boast of lakes quite at this level, but does offer several possibilities to get out on the water. One of these opportunities can be found just a few minutes from the Altstadt of Nuremberg – the Großer Dutzendteich.

Set in the district of the same name (literally, “Dozen Pond”, this area is not only one of the most picturesque in Nuremberg due to the parks, lakeside walks (and great ice-cream shop), it’s also one of the most historically interesting (or indeed chilling) due to the relics of what’s known as the “Reichsparteitagsgelände“. This is where where Hitler decided to hold the rallies of the Nazi regime, and many unfinished buildings or preserved structures remain as a symbol of megalomania. One of these buildings – the “Kongresshalle” looms over the lake and is home today to a museum.

I’ll be honest – the Dutzendteich is not the biggest or best lake to sail on – it is very shallow (no more than about 1-1.5m deep, not very big, and also has a large building (the aforementioned Kongresshalle) blocking much of the wind from the West and North-West. There are several upsides however – firstly it’s quite picturesque, it has a good Biergarten – the Gutmann am Dutzendteich, and it’s right in town which means it’s very quick to get to (always helps). It’s also the main base for the Sailing Club I’m a member of – the Yacht Club Noris.

I run training sessions occasionally here for young and old in the boat class I’ve sailed for many years – the Laser. Often, these sessions are the first time a group member has sailed a boat single-handed, and also one which can capsize. Certainly in comparison to the boats many adults have learned in, it’s much less stable and requires a bit more agility to sail (ducking under the boom is a challenge in itself…!).

In mid-September the weather can throw pretty much anything at you, and so it proved: Sunshine and warm afternoons, rain, cold mornings, and a couple of  squalls under dark clouds. Luckily all the students were dressed “sort of” for the weather, which was good as a few of them went swimming (one attempting to get into the boat, and the other two due to a capsize). Luckily there isn’t too much to fear since you can stand up in the water (albeit in the mud which lines the bottom of the lake).

We ran a few practice races and had in the end a lovely couple of days with Sunday turning out very pleasant, with enough wind to keep moving most of the time. To see how sailing on the Dutzendteich looks from above, visit the site of my friend AmbossTV who shot a drone video of a training session in May 2016 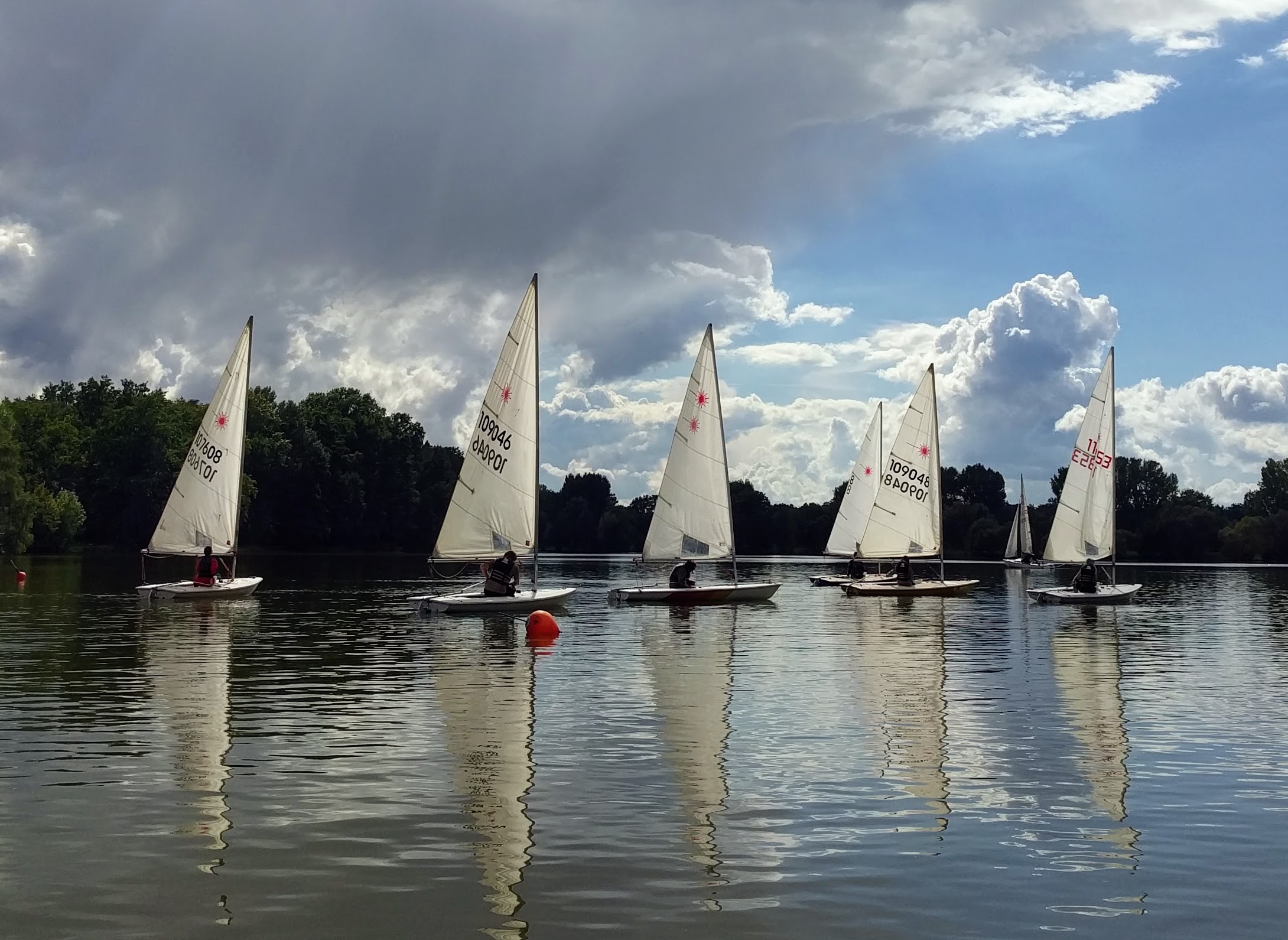 One nice aspect of sailing at the Dutzendteich is the ability to end the day with a good German beer and watch as the sun goes down. There are many sides to Nuremberg beyond beer, sausages and Christmas markets, and sailing is definitely one of the more interesting! 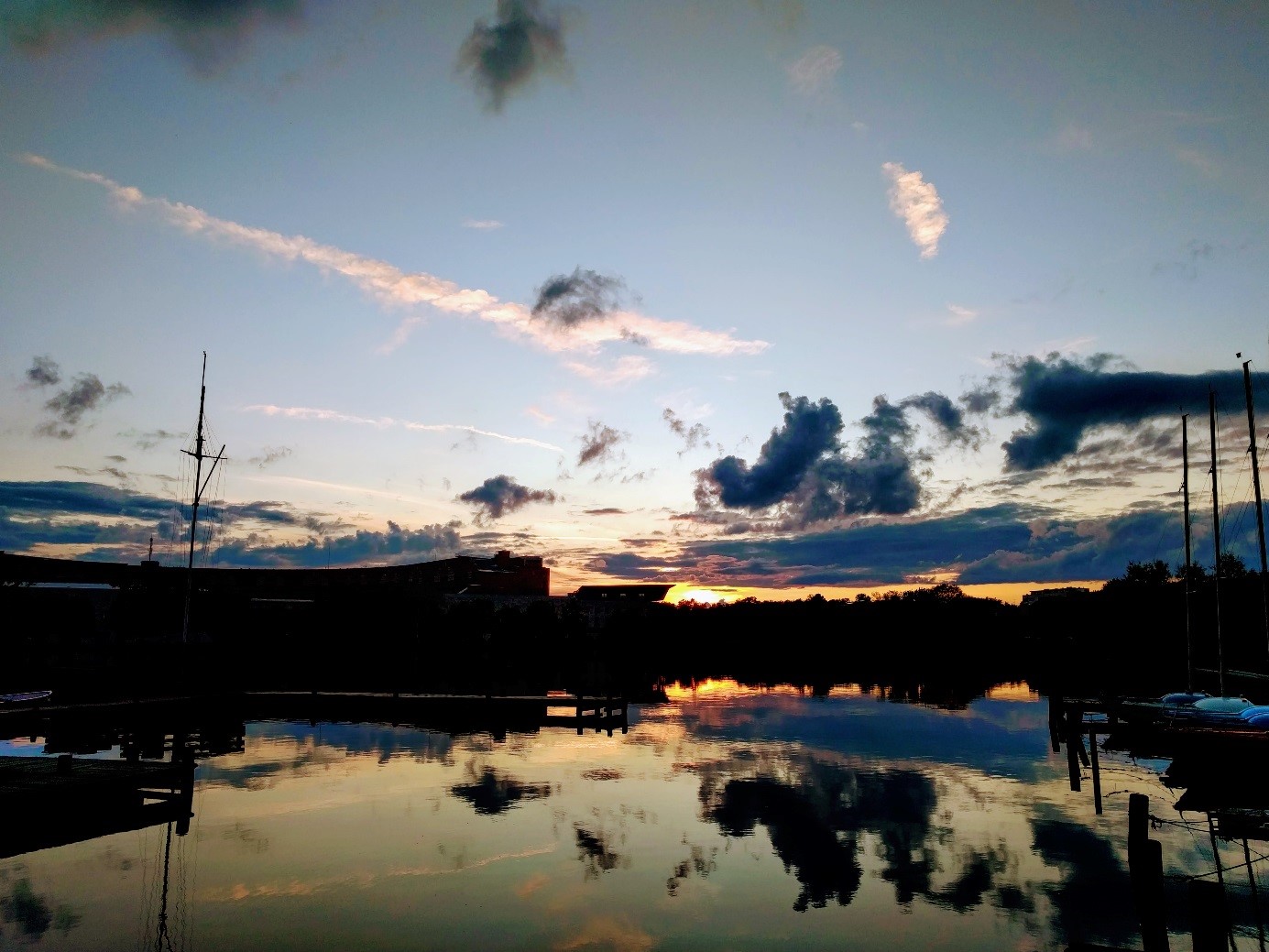 A weekend road trip to Poland